Let’s face the facts: American workers are having a hard time trying to save money.

This visual tells you all you need to know about the percentage of Americans who can’t afford an unplanned expense because they simply lack adequate savings.

Americans and Their Savings: The Real Story (Source: GoBankingRates.com)

Data shows that approximately one-third of the population has nothing in savings should a financial challenge arise, and more than half has less than $1,000 saved. Experts generally agree that we should have three to six months of monthly living expenses put away in savings, so these statistics are somewhat frightening, although most Americans aren’t all that concerned.

Why are we in this situation? Why are Americans having such a hard time putting money away in savings?

In a recent Bankrate.com survey, participants offered these responses to that question. 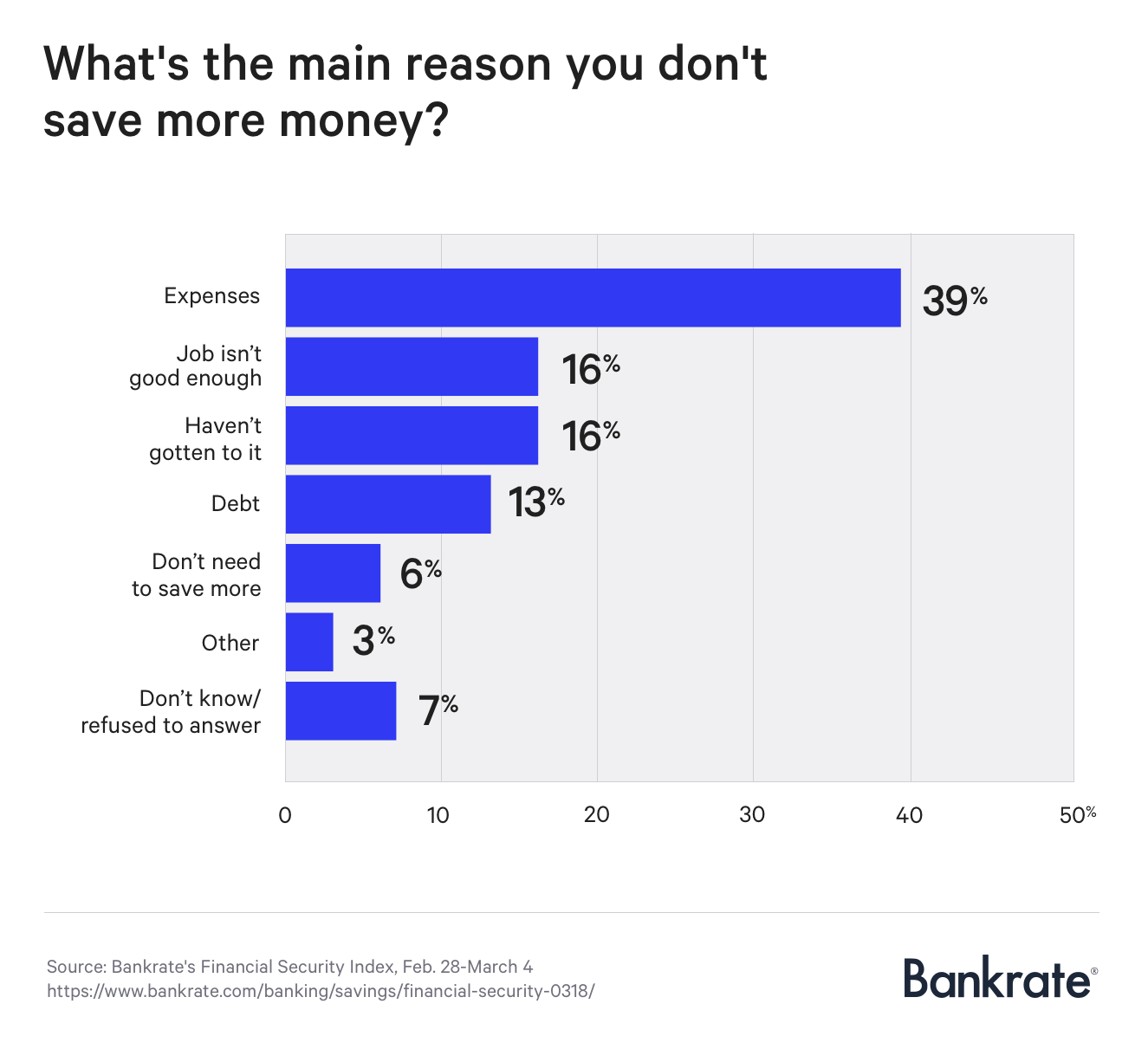 Americans living paycheck to paycheck are having a tough time setting aside extra cash for savings because wage growth hasn’t kept pace with expenses and cost of living. Now more than ever they are saddled with debt that they are constantly trying to pay down, leading to even higher debt.

A look at these statistics provides all the proof you need that we are a workforce that is in serious financial trouble when it comes to paying for budgetary necessities:

Americans Don’t Have Enough Set Aside For Emergency Expenses

If the majority of Americans are living paycheck to paycheck, with little to no savings, and can barely pay their bills on time, what do they do when an emergency situation arises, like a trip to the emergency room, a car that fails inspection, or an appliance that just decides to have a meltdown?

Without access to affordable credit alternatives, many Americans are forced to incur bank overdraft charges or late charges on their unpaid bills.

Data paints a not-so-pretty picture of just how much we pay in fees and overdraft charges:

Who’s paying these fees? A survey of heavy overdrafters (those who incur over $100 in overdraft and non-sufficient funds fees annually), conducted by The Pew Charitable Trust, revealed the following insights:

Many unbanked Americans or those without credit often turn to other options to make ends meet or to pay for emergencies, which typically leads to a cascading debt effect.

The Risk Of Turning To PayDay Loans

While providing temporary relief, payday loans often go a step further and can actually create a new cycle of debt for borrowers. Usually situated in low-income areas, payday lenders collect billions of dollars in fees and interest when borrowers can’t afford to pay the loans back, in a single payment, on their next payday.

Some payday loan statistics of interest:

Here’s a typical scenario: An employee needs to pay an unexpected bill of $100 and doesn’t have the money. They go to a payday lender, show proof of employment, and write out a check for $100 plus the finance charge (average is $15-$30 for every $100 borrowed) that the lender can cash on the next payday. Or they provide their bank details so the lender can simply withdraw what that employee owes directly from their account. For a two-week loan, the average APR is 391 percent.

However, what happens when the next payday comes and that employee can’t afford to repay the loan?

Unlike credit cards, payday loans must be paid in full at the end of the average two-week term. In that case, they’re forced to pay an additional finance charge to renew the loan or incur a bank overdraft fee, adding to their debt cycle.

So It’s easy to see how people can get into trouble with payday loans. Miss a payment and they’ll accrue compounded interest and fees until they can pay it off.

The story of Americans turning to costly payday loans was illustrated last year in a story about a college student whose student loan reimbursement check was set to arrive two weeks later than his rent was due.

Faced with the possibility of missing a rent payment, the student considered a new credit card and even a loan from his local bank before turning to a payday loan. The student even acknowledged the inherent danger of payday loans, but had decided to move forward regardless, saying,

In the case of this real life student, access to a daily pay benefit at his job could have saved him from costly fees or loans. We wondered, in a hypothetical world, what would this amount to in cost savings?

So, we mapped that out in our eBook – How Do Employees Use DailyPay?

In the book we use a hypothetical student—we called him Marty—who has a student loan payment coming due before his next payday. Without DailyPay, his options look like this:

Now consider that, if Marty had instant access to his earned pay, he could have paid $2.99 to withdraw the money for his student loan on any day of the week and ensure that it got paid on time.

The eBook also explores how a daily pay solution can help account for unexpected expenses. As previously mentioned, most American aren’t prepared to cover an unexpected expense, whether it’s related to a medical emergency or car trouble.

Case in point: auto trouble can be such a crippling issue for many employees who rely on their car to get to and from their job. If a car won’t start, it has an immediate effect on an employee’s financial well-being. If they can’t show up for their job, it could result in lost wages or even loss of their job.

And often times, it’s a grey area regarding whether insurance will cover the cost of a rental car while an auto is being serviced, and an employee could be forced to pay out-of-pocket to get their car back on the road. To afford a temporary ride, employees might pay $30-$40 extra to take out a payday loan, when instead they could just pay $2.99 to withdraw the money they need for a rental.

How Can We Do A Better Job Of Saving?

All of this data supports the fact that, as a country, we’re having a pretty tough time trying to save money. And while it’s hard, it’s not impossible. To celebrate America Saves Week, we surveyed DailyPay users to find out some of their best tips and suggestions for saving money.

Here are some of the great tips we received:

We’re going to be sharing more of these tips on our social media channels, including Twitter,  LinkedIn, Facebook, Instagram and YouTube, during America Saves Week, so be sure to tune in…and start saving America!