Yesterday, Amazon fired a shot heard ‘round the world in the labor market.

You can hear my take on the news in this video, or continue reading below the video.

Amazon—the employer of some 400,000 hourly workers—declared that they will be raising their minimum wage to $15/hour, just in time for their seasonal hiring push. If you don’t think Amazon has the ability to single handedly move markets, then think again.

Following the acquisition of Whole Foods earlier this year, economists are already attributing Amazon’s low food prices, as one reason CPI (inflation) remains low. If you aren’t concerned about Amazon’s announcement, you are living on a different planet. Amazon is coming for your workers. At the very least, the competitive pressure that this puts on all employers of hourly workers is enormous.

Amazon Can Afford Not Making A Profit

You see, Amazon is unique. They can afford to pay their people more because their company is the only company in the world that employs that many people, but yet is still valued on growth. Most employers can’t get away with not making profits, but Amazon can.

The way I see it, you have to two choices: 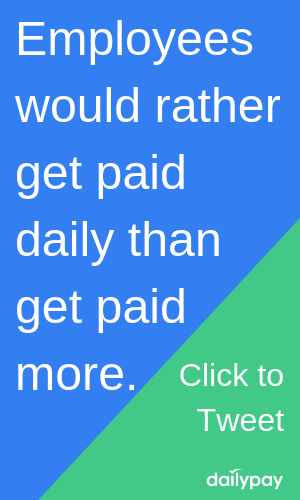 Innovate. Through the millions of payments that DailyPay has made, the hundreds of thousands of lives we have touched, one thing is clear: employees would rather get paid daily than get paid more.

Our data shows that employees are willing to take 13% less if they were to have a daily pay option.

This move by Amazon is real. It’s serious. But offering DailyPay is one way that best in class companies can continue to compete.