Blog > A 346 Pound Quarterback and The Green Goblin

Today, I am thrilled to announce the addition of Dontari Poe (nose tackle for the Atlanta Falcons) and Jalen Mills (cornerback for the Philadelphia Eagles) as DailyPay investors.

Dontari Poe embodies everything we stand for at DailyPay:  grit, determination, character.  He grew up in the Whitehaven section of Memphis, surrounded by drugs and gang life.  The first time Dontari played football was in high school.  He quickly learned the game and went on to become a first round NFL draft pick. Additionally, he was the first player ever in Memphis history to be drafted in the first round (#11 overall).

Growing up, Dontari watched his mother Sandra work multiple jobs. With each of them, she would wait for payday so she could put food on the table for her family.  When I first sat down with Dontari, it was clear that we were a great fit for one another.  We both passionately believe in technology’s ability to create financial and social empowerment, especially for those most in need of it. Dontari’s foundation Poe Man’s Dream is dedicated to introducing technology to underserved middle and high school students to do just that.

But the moment where it really clicked for me was when I saw Dontari throw a touchdown pass against the Denver Broncos on Christmas Day 2016.  Any 346 pound defensive tackle who disrupts the playbook in that way, is someone we want at DailyPay!

We are also thrilled to be teaming up with Jalen Mills.  We hope some of Jalen’s unique style and energy rubs off on DailyPay.  Jalen’s now NFL-famous green hair has dubbed him the nickname the Green Goblin, and the hashtag #MoneyMills.  While financial health is a serious and important mission, we intend on tackling it together with fun, hustle, and style.

When we first started DailyPay, people thought the idea of an employee receiving his income instantly was a crazy idea. I guess after you’ve seen a 346 pound quarterback and an NFL player with green hair, it doesn’t seem that crazy after all. 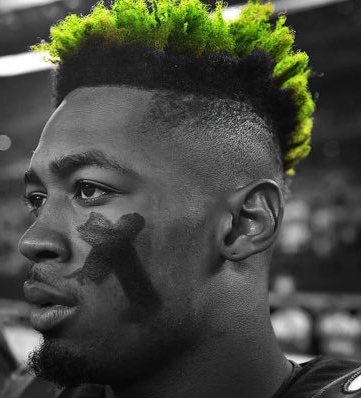 For more information, you can read the press release here: https://dailypay.tm/2s03LMa

Learn more about DailyPay and how it can improve your bottom line by helping to reduce turnover, incentivizing your employees to sign up for direct deposit, and improve employee attendance.